FINEOS, an award-winning provider of packaged software solutions for the insurance and banking industries today announced two executive appointments in support of its strategic growth in Asia Pacific. Philip Small has been appointed to the FINEOS board of directors, with specific responsibility for Asia Pacific, and Mike Brosche has been named Business Development Director, Australasia.

Small has served as an advisory director for FINEOS since 2003. He has more than 25 years experience in insurance and banking software and has a detailed knowledge of the market in Asia Pacific, having held a number of senior management positions as a technology executive in the region. He was most recently president of CSC’s Financial Services Group in Asia Pacific, a position he held until 2001. For several years prior, Small managed operations for Continuum in Asia Pacific. Small began his business development career at Paxus Corporation and was responsible for growing that company into the leading supplier of back office insurance solutions in Europe with more than 130 customers in 17 different European countries.

Brosche brings more than 20 years insurance industry experience to FINEOS. He will be responsible for all aspects of business development for FINEOS in Australasia. Prior to joining FINEOS, Brosche held a number of senior business development and consulting positions with CSC, IFDS, an outsourcer of collective investment systems, and Paxus Corporation where he worked and lived in Australia and Europe.

“These appointments are part of the company’s strategy to bolster our Asia Pacific regional base,” explains Michael Kelly, president and CEO of FINEOS. “We’ve enjoyed significant success in Australia and New Zealand since our entry into the market in 2004. We want to build on that success by growing the company locally. We established a sales office in Sydney in 2004 and a regional capability centre in Melbourne from where we maintain a staff of more than 60 professionals. These appointments are part of a regional expansion strategy, which is helping FINEOS to become a leading global brand. Both Philip and Mike have the credentials and experience to make that happen. 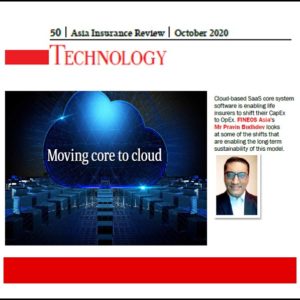