Ireland’s Taoiseach (Prime Minister), Mr Enda Kenny presented the 2012 FINEOS Innovation and Excellence Awards to Liberty Syndicates (UK), Mutual of Omaha (US) and Friends First (Ireland). Commenting at the awards ceremony, the Taoiseach said, “I’m delighted to announce the winners of the 2012 Innovation & Excellence awards who have been recognised for their vision and creativity in using claims technology to achieve operational excellence.  I’d also like to thank everyone who has travelled from all over the world to attend the FINEOS Claims Summit here in Ireland.  I hope you enjoy your stay with us and that the links and relationships you are forging here will help drive further business success.”

This year’s Summit attendees heard industry experts discuss a range of topics.  The keynote speaker, futurist David Smith of Global Futures and Foresight (GFF), looked at the opportunities and risks facing the insurance industry as it attunes itself to the new business landscape. John Leonard, Chair of ACORD and President and CEO of Maine Employers Mutual Insurance Company (MEMIC), discussed how best to manage claims amidst rising medical costs. Peter LeBeau of The Protection Review explored why claims service is so important and what could be considered best practice customer service for claims. He posed the question, ‘Can Claims really be seen as the ultimate customer service and if so, how do we need to rethink our claims management?”.  IBM Insurance Partner, Patrick Sheridan, revealed the results of the recent IBM Outlook Study on Insurance and shared perspectives from Insurance CEOs and CIOs.   Suzan van de Kerk, the Global Life Chief Claims Officer for Zurich Insurance, discussed the company’s plans to create an optimal and consistent claims process across Zurich’s servicing hubs around the world.

Commenting at the conclusion of the Summit, FINEOS CEO, Michael Kelly said, “This is our first Summit in Ireland and it has been a huge success.  It also coincides with an exciting period of growth for FINEOS. We closed four new deals in the last quarter – two in North America and two in Australia. €2 billion of insurance claims payments were handled by FINEOS software in the last 12 months and 40 million claims are now in FINEOS systems around the world.  We believe we are on on-track to become the world’s leading provider of claims processing software to the insurance sector”. Honoured for its innovative use of analytics to proactively improve client outcomes for injured New Zealand ... 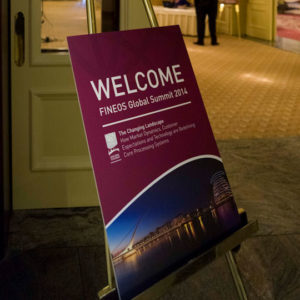 FINEOS Gears up for its Seventh Annual Global Summit